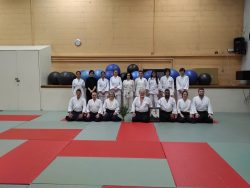 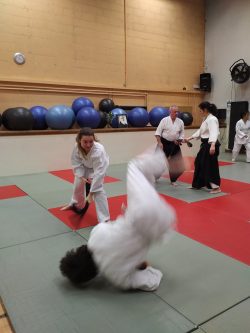 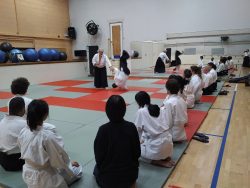 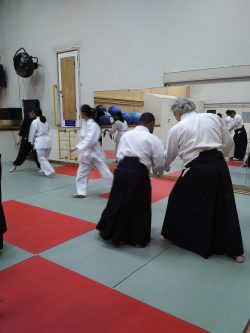 Prof. Mire Zloh, 5th Dan Aikikai, Senior coach (CL3)
I started practising Aikido at the Aikido club “Pinki”, Zemun, Yugoslavia IN October 1982. My first Aikido instructor was Njegos Djakovic Sensei. In the enthusiastic Aikido family, I have established some life-long friendships including that with Sasa Obradovic Sensei. After a longer break in my Aikido practice due to moving to the UK, I found the UCLU AIKIDO club in London in September 1994. My Aikido life continued with constant help of Barbara Sotowicz Sensei and many friends in the UCLU dojo. I met a lot of friends during UKA courses. I express my special gratitude to Barbara Sotowicz and the late Mr William (Bill) Smith Shihan (UKA Principal) for their selfless help and encouragement.
I obtained my Shodan during the UKA Summer School in August 1996. Also, I got BAB First Aid, Coach and Children Coach awards, and became instructor in the UCLU Aikido Club in 1997 and UKA Fukushidoin in 1999. I was awarded the 4th Dan grade in 2003 after a grading in March that year under Mr Smith Shihan (UKA) and was promoted to 5th Dan in 2018.
I started the YMCA Walthamstow Aikido Club in May 2001. Sadly, due to my injury that took over one year to overcome, the dojo was closed in 2010 and I focused more on my career. Since 2012 I have focussed on helping Aikido Bedford club and clubs in Serbia. I still work closely with Barbara Sotowicz Sensei and the UCL Alumni Aikido Group.
I am a lifetime member and Shidoin of Aikikai Serbia. I am also a member of United Kingdom Aikikai (UKA) where I attained the Senior Coach (Coach level 3) qualification.

Sensei Mire was one of the guest instructors at the UCL Alumni Aikido Group & Friends Reunion 2016:
UCLAAG Reunion2016 InstructorProfiles

UCL Aikido Club is a friendly club which welcomes practitioners of all levels, beginners to dan grades, as well as people with a cultural / social interest in the club. Beginners are welcome to come and train at all times. So don’t delay, join now and keep Aikido active at UCL 🙂