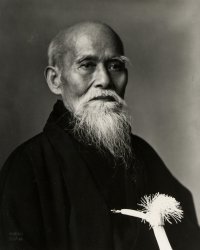 Aikido
is a modern Japanese BUDO (martial way), founded by Morihei Ueshiba, 14 December 1883 – 26 April 1969. The literal translation of Aikido is “The way of harmony with Ki”. In Eastern philosophy, Ki is universal and exists in each person as the life-force or breath.

Aikido is an art that does not seek to meet violence with violence and yet it maintains its martial origins. It uses spherical movements which enable the practitioner to blend with the motion of the attacker and turn the attacker’s force is against her/himself. The main form of Aikido techniques are joint immobilizations and throws using the opponent’s momentum. Techniques are practiced against one or more opponents. Practice with boken (wooden sword) and jo (staff) serve to assist understanding of the techniques and their development.

Aikido does not require physical strength or aggressive spirit. It is non-competitive and everyone is able to practice together: women and men, advanced and beginners, big people and small. Practice partners work together for mutual development.

Aikido is a very enjoyable activity and an excellent natural exercise for the whole body. It teaches and develops effective movement, self-control, co-ordination, balance, timing and mental and as well as physical flexibility. These qualities should prove useful in self-defence.  Aikido philosophy and principles are not just for the Dojo. Practitioners should find them helpful for daily life.

For information on the FOUNDER and his successors, DOSHUS, see:

AIKIDO BOOKS Beginners should find the following books helpful in their study of Aikido: